TV investments at odds with reality?

Sveriges Mediebyråer just published their latest barometer for media spend in Sweden, revealing persistently large investments in linear TV. In this post, we dig into why the current TV ad spend might not be in harmony with actual user behaviour.

The below chart pretty much sums up the gist of this blog post. The blue bars show the investments from Swedish media agencies (Mediebyråbarometern, Sep 2019), and the black ones show Swedes’ daily usage of platforms in 2019 (IRM, Svenskarna och Internet).

If you won’t read any further, consider this question: is the advertising investment by media agencies in Sweden harmonised with the possibilities of reaching target audiences? 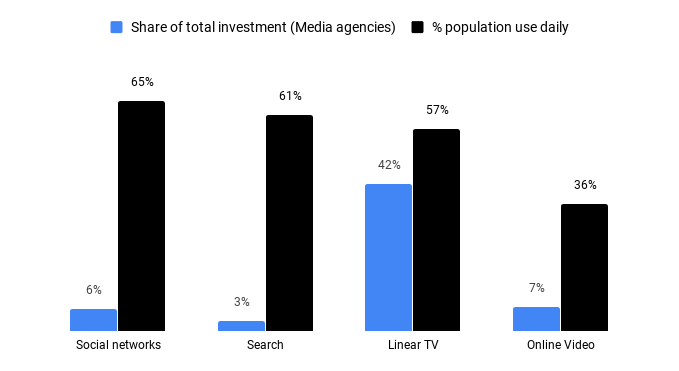 The publication offered few surprises and is largely aligned with similar market reports: investments in digital channels like Social Networks and Online Video keep growing aggressively; some traditional channels, such as Print, are still on a steady decline; other traditional channels, such as Radio and OOH, are enjoying some rejuvenated growth. And then there’s that one thing that keeps standing out: the investment in linear TV. It is massive, growing, and represents 42% of these media agencies’ total advertising investment.

In the midst of persisting buzzwords like “digital transformation” and “the year of mobile” (again), we still see that some things do indeed remain the same. Linear TV still holds the largest piece of the pie by far, and we think this raises a lot of questions.

Let’s put these media agencies’ advertising spend in perspective. The chart below shows a comparison between their investment, and all the media spend in Sweden as surveyed by IRM for the second quarter of 2019. (IRM, Andra kvartalet 2019).

A big argument motivating linear TV investments is that it builds reach over time. OK, let’s zoom out from the daily usage and look at how Swedes respond about their overall usage according to IRM, segmented by platform.

Let’s keep this simple: more Swedes search on Google than watch linear TV. And arguably, the overall usage of a platform like YouTube, and of the whole Facebook stack (including Instagram), is at least comparable to that of the TV usage. So why is the advertising investment of media agencies so low in these digital channels? Shouldn’t one allocate advertising money somewhat proportionate to where people are actually active? (we’ll get to actual time spent later in this post).

We’ll be the first to admit that there might be some hidden values here, something we’re missing that motivates linear TV investments in general. And to be clear, we think TV investments are good. It is still a relevant platform and will be for the foreseeable future. But we do not think anything could justify an investment in linear TV that is 500% higher than that of Online Video, or 540% higher than that of Social Media. That doesn’t sound like a well balanced portfolio, optimized toward the highest impact per SEK invested.

Let’s dig a bit further, maybe we can find some of those hidden values.

Anyone who has read recent demographic reports will know that linear TV nowadays is primarily weighted towards age segments of 45 or older. If you want to reach people younger than that, online video and social platforms have the larger volume. This is the standard pitch you will get from the likes of Google and Facebook, so there’s no need to push at open doors here. Simply put: unless your target audience is almost exclusively aged 45 plus, a 42% media investment in TV seems hard to justify from a demographic viewpoint.

Beyond the sheer % usage numbers, one might question if time spent shouldn’t be a factor as well. Isn’t linear TV worth the investment simply because people spend more time watching content there? Well, at least if your target audience is within the age span of 25-54, that is not the case. A recent report from MMS showed that the average daily watch time on TV4, TV3, Kanal 5 was 16 minutes, 5 minutes, and 5 minutes respectively. For YouTube, it was 23 minutes (MMS Trend & Tema Q3-Q4, 2018). It doesn’t seem like it can be the time spent that motivates the TV investment either.

A remaining argument for investments, commonly used by the TV networks, seem to be the trust-factor that these channels emanate. The value of being associated with household brand names in the shape of widely popular TV shows. This argument is wielded like the holy grail by the networks and is a hard one to call without data. But it is difficult to imagine a scenario where this trust-factor is sufficiently better than that of digital channels. Enough to give ground to the kind of investment allocation that we observe from the large media agencies.

What we do know is that the combination of digital channels such as Online Video and TV creates more effective advertising, there’s an abundance of study showing this (e.g. WARC 2019, What’s working in online video). We also know that, according to “Svenskarna och Internet 2019”, when it comes to the Internet in general, the older age segments are actually the ones who find it the most trustworthy (peaking with men 56-65 years old). Which makes it even more odd to argue that – with older age spans being overrepresented on the linear TV channels – advertising so dominantly on non-digital is the way to go.

Where are we going with all of this?

As previously pointed out, our agenda is not to bad-mouth linear TV investment per se. It remains a relevant platform for most advertisers, has tremendous reach, and can get brands associated with relevant and high-quality content. We just question whether the proportions of investments are prudent. Do they really reflect the potential target audiences behavior today? If you are a marketer and this average distribution of investments match yours, it’s probably a good idea to evaluate if you’re really getting the most bang for your buck.

How about Precis? Can’t one argue that our advertising investments are not aligned with actual user behavior either? After all, we are fully invested in digital channels (Search, Facebook, and YouTube being our largest ones), and manage none of our clients’ TV investments (although we happily help plan overall investments – but we will apply data-driven and statistically proven methods for allocating media spend).

Well, there’s one key difference; we’ve never entitled ourselves a full-service agency. We are geared towards digital, and that’s the domain in which we operate. But, the media agencies do typically position themselves as such – full-service agencies that will consider all potential channels for their customers, with an holistic view on what makes up a reasonable, healthy, media mix. And for some reason, this means 42% investment in linear TV. We would love to hear the arguments why.